Israeli security forces will be deployed next to the Dome of the Rock mosque in clashes with Palestinian protesters on the grounds of the Al-Aqsa Mosque in Jerusalem on Friday. Ahmad Gharabli / AFP via Getty Images Hide caption 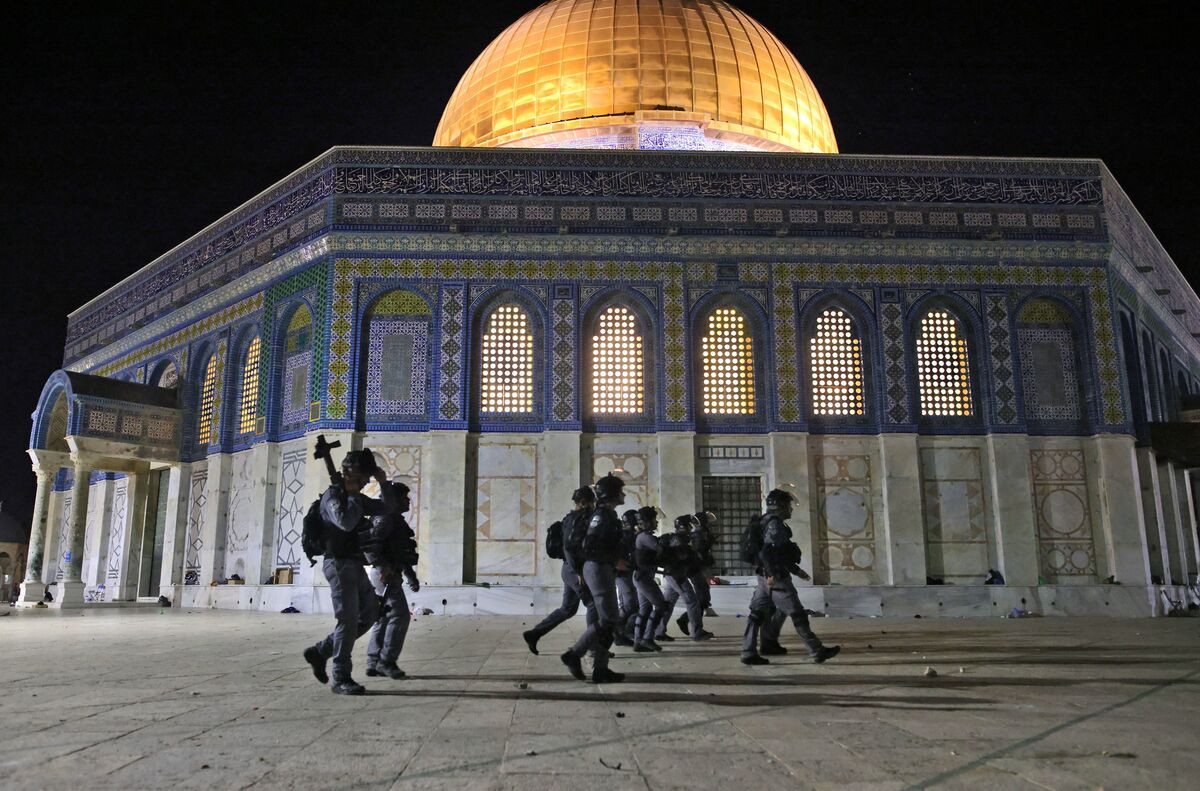 Israeli security forces will be deployed next to the Dome of the Rock mosque in clashes with Palestinian protesters on the grounds of the Al-Aqsa Mosque in Jerusalem on Friday.

The weeks of sporadic violence between Israelis and Palestinians in Jerusalem increased on Friday evening in a holy religious place for Muslims and Jews as the end of the Muslim holy month of Ramadan drew near.

In Al-Aqsa Mosque, one of the holiest places in Islam, Israeli police in riot gear confronted a crowd of Muslim worshipers. Worshipers threw stones and chairs at the police, who fired rubber-coated bullets and stunned grenades.

Palestinian medics said more than 20 Palestinians were hospitalized, most with injuries to their eyes and face. There have been reports of many more people with less severe injuries. The Red Crescent Palestinian Ambulance Service said 136 people were injured in clashes, the Associated Press reported. Israel said six police officers were injured.

Earlier in the day Israeli settlers and Palestinians clashed on a street in Sheikh Jarrah’s East Jerusalem neighborhood, where Palestinian families are fighting a court-ordered eviction.

A long-standing legal battle over the occupation has led to conflicts in the past few days. The Israeli Supreme Court is expected to make a decision next week on whether to evict Palestinian residents from land that Jewish settlers claim as their own.

The United Nations called on Israel to stop all evictions in the neighborhood.

The US is pushing for calm. The State Department said it was “deeply concerned about mounting tensions” and the displacement of Palestinian families.

“It is important to avoid unilateral steps that exacerbate tensions or further remove us from peace,” a department spokesman said in a statement. “As we approach a sensitive period in the coming days, it will be of vital importance for all parties to maintain calm and act responsibly in order to reduce tension and avoid violent confrontations.”

The Egyptian Foreign Ministry condemned the intrusion into the mosque and urged the Israeli police to protect the rights of the Palestinians to practice their sacred religious rituals. Ministry spokesman Ahmed Hafez said the illegal threats to the Palestinian-occupied territory “are a violation of international law, undermine the chances of a two-state solution and threaten the foundations of security and stability in the region.”

The violence threatens to spill over into the “Night of Fate” on Sunday, the holiest night on the Islamic calendar when worshipers will gather in the Al-Aqsa Mosque. It is also the start of Jerusalem Day, a national holiday for Israelis.