Upcycling is on the rise, however now it is time to diversify merchandise


Seo Ji-hye, a 42-year-old mother of two girls living in Seoul, calls herself an ethical shopper. Whenever she has to make a purchase, the first thing she takes into consideration is whether it is an environmentally sustainable product that can be reused or upcycled. 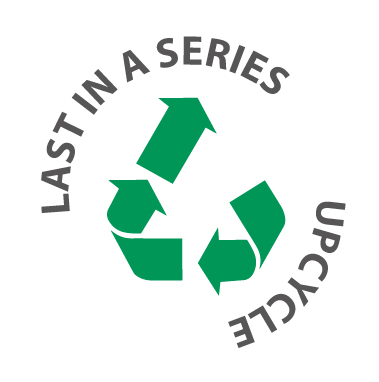 Her bag, as well as her two daughters’ school bags are made from recycled polyethylene terephthalate (PET) bottles, more commonly known as transparent plastic bottles. Her wallet is made from upcycled milk cartons. Most of the cups in her cupboard are made of upcycled glass, the green ones were once Perrier bottles and the brown ones were beer bottles, while most of her furniture are made of abandoned boat wood. Upcycled clothes are the easiest to get, according to Seo, who says that she’s “even getting spoiled for choice, with more and more companies with good environmental, social and governance — or ESG — jumping on the bandwagon.”

“You may think, ‘what a fuss,’ but it’s actually quite fun discovering new upcycling brands that are quite trendy as well,” said Seo. “I used to live in the United States and I hardly recycled. I threw everything out together in a plastic garbage bag because everyone was doing it. I was aware that I was polluting the environment, but I just thought nothing much can change even if I make an effort because no one else is doing it either.”

After moving back to Seoul in 2015 and dealing with serious fine dust levels, Seo said she began to take interest in environmental issues and began taking steps to change her lifestyle.

She took it step by step, from recycling properly and cutting down on her use of disposable products to now more active practices like taking her own reusable containers to pick up food from restaurants and buying upcycled products whenever she has to make a purchase.

For those who are confused by the eco-friendly terminology: If recycling is destroying waste in order to create something new, upcycling is the process of transforming waste materials into new materials or products perceived to be of greater quality. Reuse, simply means using the product again.

“That’s why a lot of businesses in recent years are jumping into upcycling because it not only appeals to millennials and Gen Z who perceive that taking lead in protecting the environment is something trendy, but also creates revenue as it transforms waste materials into products that are of higher quality that also have good meaning,” said Lee Eun-sun, a socio-economic professor at Gyeongsang National University of Science and Technology.

There are several popular upcycling brands that serve as role models to many startup companies. They include Zürich-based bag retailer Freitag, which makes its products from recycled truck tarps and American clothing brand Patagonia, which has an upcycled clothing line made from scraps of used garments collected at its Worn Wear facility. Taking the business models of such successful upcycling brands, many copycat companies began to sprout in different parts of the world.

As of March 18, at least 100 projects on the crowdfunding platform Tumblbug in Korea were related to upcycling products, however, the majority of them were bags, pouches made of recycled PET or old jeans, as well as cup holders and coasters made of recycled fabric.

“Of course such increase in environmentally conscious businesses is a positive phenomenon but it’s time to diversify products,” said an environmental activist who wished to be identified only by her surname Park.

“Personally, I believe there are too many companies that sell bags made of PET, tarp, old jeans, and so on. I even read about this brand that imports clean PET bottles from other countries to produce upcycled bags in Korea. It is still better than nothing but if you really think about the environment and want to establish an upcycling company, you should of course have a genuine heart for the environment but also try to think outside the box and be a disruptor not a follower in the industry.” 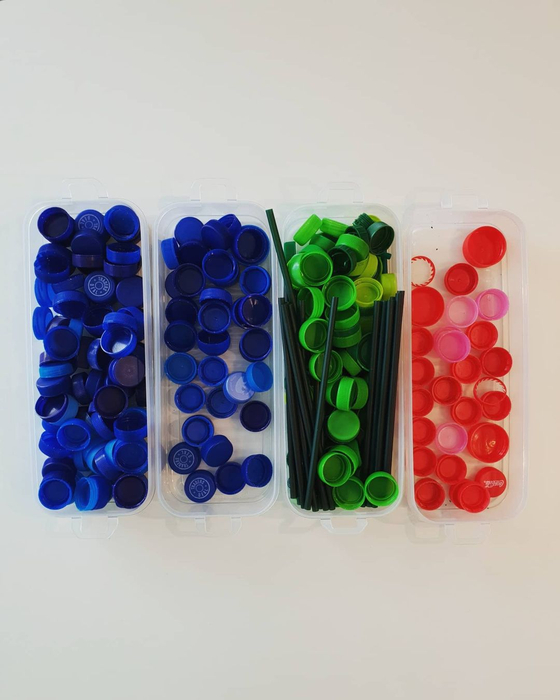 Almang Market collects plastic bottle lids from its consumers to send to upcycling artists as these plastic pieces are too small to be recycled at district recycling centers. [ALMANG MARKET] 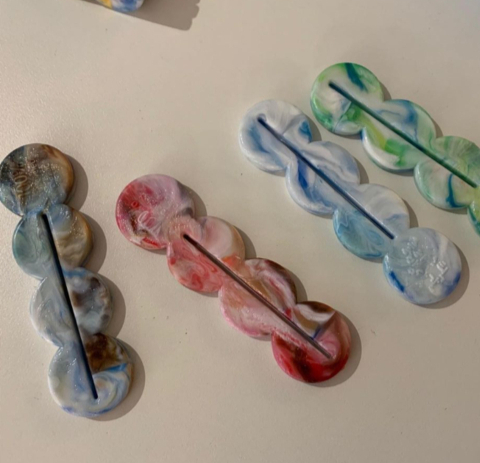 The colorful plastic bottle lids are turned into different items such as toothpaste squeezers. [ALMANG MARKET]

Yang Rae-gyo, one of the three founders of Almang Market, a zero-waste store in Mangwon-dong, western Seoul, said she somewhat agrees with Park’s comment, adding that there are many innovative small brands that use various recycled materials to create upcycled products. Almang Market is one of the first and fastest-growing zero-waste stores in Korea.

“That’s why we collect plastic bottle lids, yellow spam lids and so on and send them directly to [the brands] as these items are too small to be recycled at the recycling centers, but can be upcycled by innovated artists and designers,” said Yang.

Innisfree, a sub-brand of Amorepacific, is also one of the leading cosmetics brand in Korea that’s committed to protecting the environment. Its store in Samcheong-dong, central Seoul, is widely known as an “upcycled store.” Nearly all the construction materials, from its floors and walls to benches, shelves, vases and even installation objects are made from upcycled materials. Even the “Push” sign on its door is made using upcycled plastic containers.

According to Amorepacific, Innisfree has been organizing the “Empty Bottle Collecting Campaign” since 2003. Using the collected plastic containers, the brand was able to construct 70 percent of this “upcycled store” by upcycling them.

According to Innisfree, this paper bottle packaging is made with an outer paper mold, a lighter inner plastic liner to protect the formula and 10 percent recycled plastic used for the cap. Once customers have finished the serum, they can simply peel off the label and pull the two halves of the molded paper shell away from the inner plastic container to recycle separately.

The brand said it is continuing to expand the use of the paper bottle packaging in other products as well and at the same time, moving forward with research to minimize the use of plastic.

Environmentalists have in fact been stressing that cosmetic packaging is one of the most detrimental materials to the environment when thrown out thoughtlessly.

“Cosmetic packaging can take thousands of years to break down in landfills, not to mention toxic chemicals in cosmetics washed down drains end up in oceans damaging the ecosystem and killing aquatic species,” said Yang.

“Use of different ingredients and chemicals in beauty products such as tiny balls of plastic used in facial exfoliators known as microbeads and a chemical known as Oxybenzone found in sun creams, are some of the widely known examples.”

“The beauty industry should really take social responsibility and make various efforts to decrease carbon footprints and think about the toxic impact it can have on the planet,” Yang added. 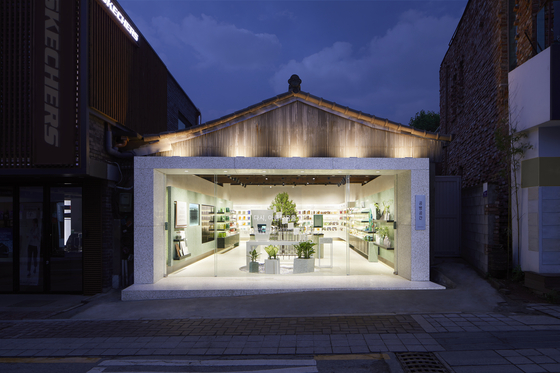 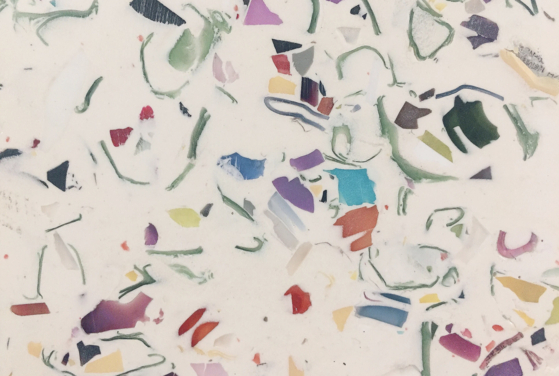 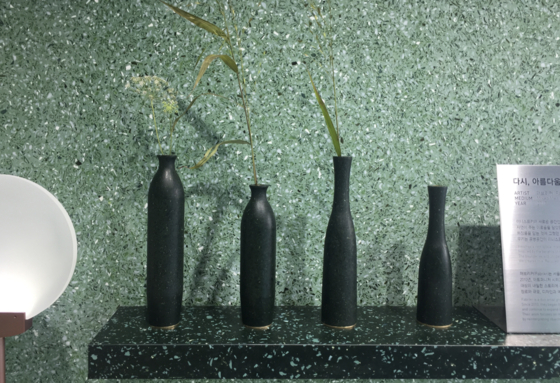 “By upcycling 230,000 plastic bottles, we were able to create this space for Innisfree,” said Kim Sung-jo, one of the two designers at Fabrikr. “Discarded materials and even spaces are always attractive to us because they contain stories or unique values that are not found in new ones. It’s very rewarding to give new, greater values to products that were once neglected or discarded, that can even harm the environment.”

Fabrikr, as its name hints, began working with discarded fabric. Many of its earlier products are creating chairs and tables by layering pieces of colorful fabric remnants and adding epoxy. The duo also likes to pick up broken furniture and give it new life by filling the broken parts with either fabric or just epoxy.

“When you go around apartment complexes, you can find broken furniture very easily,” said Kim Dong-kyu from Fabrikr. “Just because it has a chipped corner, it doesn’t mean that it should be discarded. It can be mended and upcycled to be used as a beautiful wooden table.” 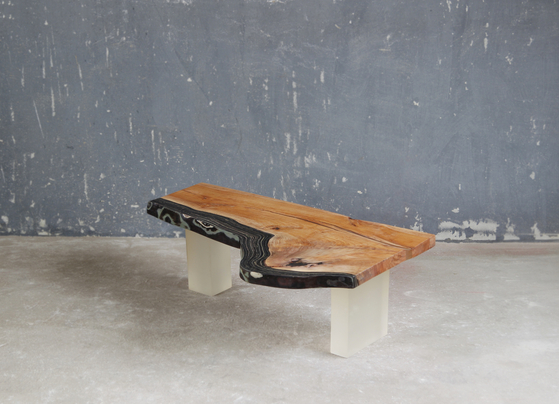 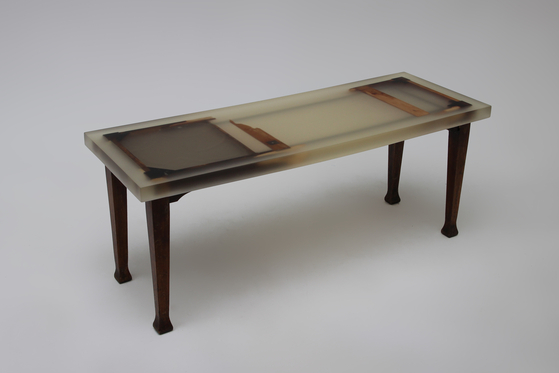 Fabrikr often picks up broken furniture and upcycles it. Above is a table made from a broken door. [FABRIKR] 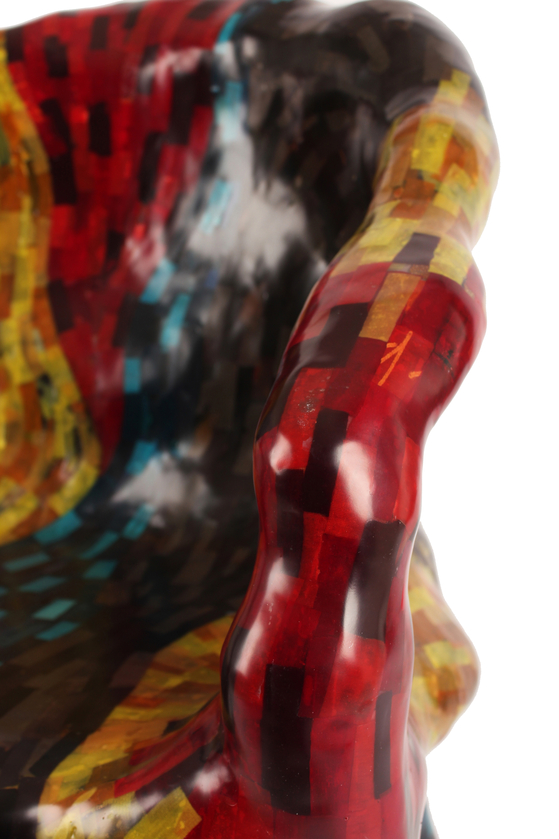 
It’s not only abandoned fabric remnants and broken furniture that Fabrikr breathes new life into.

Do you remember the giant rubber duck that floated around Seokchon Lake in Jamsil District, southern Seoul in 2014?

Dutch artist Florentijn Hofman launched the Rubber Duck project in 2007 and since then different versions of this giant duck have been displayed more than 20 times in 16 different countries.

Lotte Group, the project’s sponsor, decided to let the duck loose on Seokchon Lake for about two months. Although many people think this giant 16.5 meters (54.14 feet) high and 18 meters wide Rubber Duck, which is made of polyvinyl, tours around the globe, the duck is actually made new in each country. After its time on the lake, it was deflated and Fabrikr upcycled this industrial waste and turned it into 20 rocking chairs. The design duo held an exhibit titled “Come Swing with Rubber Duck” at Lotte Gallery in Seoul and Busan.

Fabrikr has also partnered with Cafe Onion to create sustainable spaces for the popular cafe.

“We try to minimize the industrial waste during construction and upcycle it to create new materials to make benches for the cafe and so on,” said Kim Sung-jo.

A growing number of fashion brands are also taking more responsibility in reducing their carbon footprints, in other words, reducing the amount of carbon dioxide emitted during the production and use of their products and also upcycling their own scraps or previous seasons’ unsold stock.

“I was shocked to find out that what I love doing, which is creating fashion, destroys the environment,” said designer Choi Kyoung-ho of Holy Number 7. Choi launched the brand with his designer wife Song Hyun-hee in 2017. At first, their key concept was just to “spread positive influences.”

“Usually street fashion brands have slang words and rebellious images printed on the clothes but we wanted to send positive messages instead like, ‘You are Beautiful’ and “Love Yourself’ and so on,” said Song. “Recently, our interest has been directed toward saving the planet because that’s also one of the positive influences that fashion designers can exercise.”

For their new collection, the two designers decided to expand its upcycling line and also raise awareness about environmental pollution caused by textile waste during the upcoming Seoul Fashion Week, which kicks off online today.

During the show, which has already been filmed at the National Museum of Korea, Choi and Song attempted to showcase the environmental threat that textile fashion industry imposes. 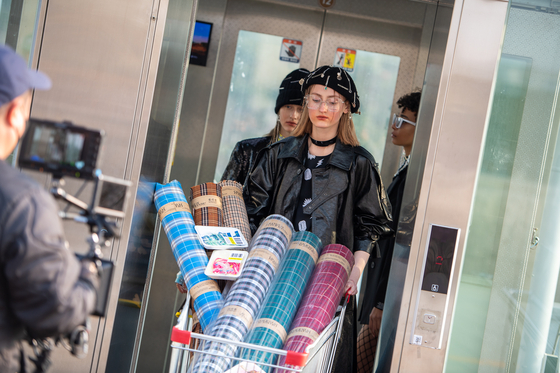 
For the show, the designers also had their models push supermarket trolleys that had rolls of fabric and leftover materials that have been “overly packaged” inside Styrofoam trays wrapped with multiple layers of clear plastic wrap.

“The slogan for the upcoming season is ‘Change is in our hands,’” said Choi. “To lead the market change in the textile fashion industry, Holy Number 7 prepared this collection by considering the fundamental aspect of sustainable fashion: Reuse what is available now rather than produce something new that will eventually become trash.”

“Textiles are discarded in landfills due to changing seasons, fabric overstock, trend changes and the low number of exports. Instilling designer’s value into the soon-to-be incinerated deadstock fabric is what created this purposeful collection. It may not be perfect from the beginning, but small movements will change the world bit by bit,” Choi added.

Query answered? How has the pandemic affected Ripon Faculty enrollment and recruitment? | information